What is The Solution to Rising Levels of Knife Crime?

The number of offences involving knives or sharp instruments has increased by 30% since 2011 (Sky News). This rising level of knife crime has whipped the media into a frenzy, with knife crime now described as an ‘epidemic’.

Media outlets across the UK are quick to argue that the typical perpetrator is young and working class, painting those involved as criminal teenagers who cannot be controlled. The result of this is a society that is growing fearful of its youths.

The strategies in place for tackling the rising levels of knife crime adopt an epidemical approach that requires strict punishment and harsher prison sentences. It is hoped that this approach will deter young people from getting involved in knife crime. Alternative approaches argue that exposure to psychological and social risk factors from family, peers or at school have been the main causes for increased knife crime and supporting young people is the way forward.

Loughborough University, in ‘Knife Crime: Children are not the problem’, argue that in order to identify appropriate solutions to children carrying and using knives, society must bring the issue into its proper perspective. It is argued that a complex problem, knife crime is in fact a symptom of a toxic environment which is created around children, who then become both perpetrators and the victims.

We have previously seen the impact that toxic environments can have on why a young person may run away from home. There is also a strong connection between identity and violence, especially in terms of gang culture. When a young person identifies with an older peer, who has come from the same background as they have, they are likely to want to follow in their footsteps.

It is therefore not surprising that a young person or child who is unhappy at home may join a gang where they feel that they are supported, listened to or protected. These young people may then be provoked into carrying knives or committing violent acts.

The vast majority of this knife crime and child exploitation takes place in locations suffering from social disadvantage. Environments in which a young person does not receive the necessities of protection, nurture and the ability to achieve positive outcomes becomes harmful. For example, a young individual who does not have the ability to afford the necessities in life may turn to gang members in the local area for financial gain. 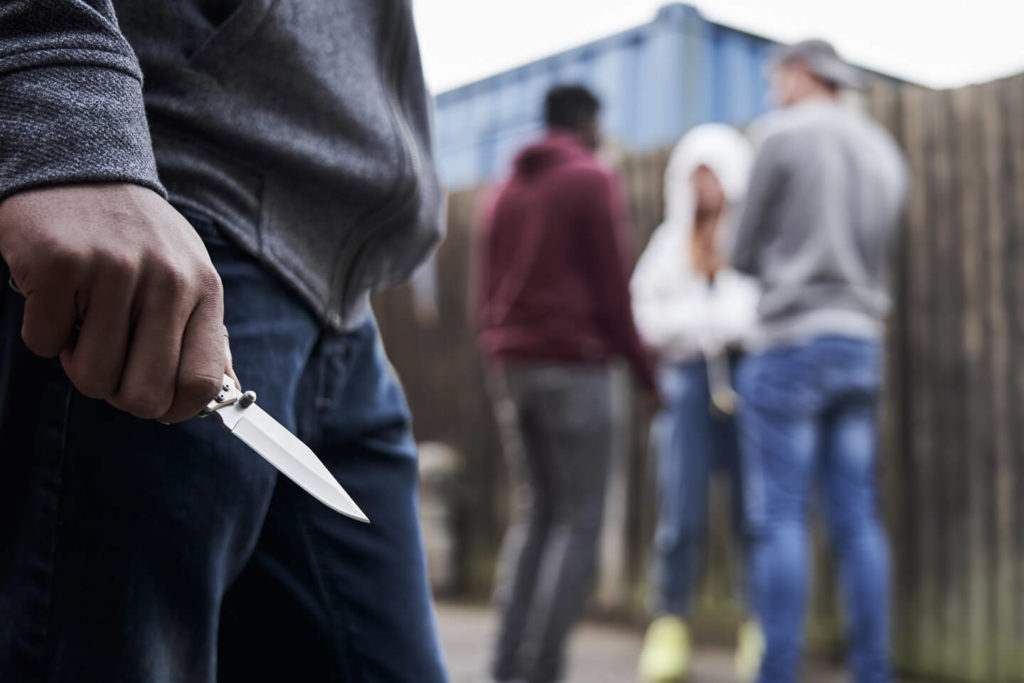 Harmful environments are not created by children. These children are victims of the environment they have been brought up in and may feel there is no other way to change their situation.

Knife crime, however, remains just that – a crime.

It is therefore important to support the victims of the environment to reduce the number of individuals that are victims-turned-perpetrator.

This can be achieved through focusing on the environments that shape young people. Partnerships with children’s services such as youth offending teams, schools and local youth clubs are important in prioritising positive outcomes.

At A Wilderness Way, we understand how important it is that young people have access to a range of services, guidance and opportunities in order to build upon their strengths, capacities and aspirations. This is an approach that will improve children’s lives and their prospects while reducing criminal and antisocial outcomes.

Our crisis intervention programme has supported many young people who have been subject to harmful environments and gang culture. Beth, for example, came to us in 2017 when she was 13 years old after exploitation from an older gang. Through alternative education, learning and opportunities, Beth was able to experience freedom. Gradually, she grew in confidence and most importantly, has learnt to be a child again.

For further information, send us an email to referrals@awwltd.com.

What Others Say About Us

I am truly taken aback by the level of care you have shown. The staff have gone out of their way to show him the attention and care that he has never had. When I visited him, it was like I was looking at a different child to what he was before he came. He was not like a child in care, he was like a child in a family. You have literally saved his life.

I am so grateful to the AWW team for their dedication and commitment to caring and supporting Sam. He recently reported that being at there gave him the space to think and the opportunity to reflect on his attitude and make plans for his future.

I have to share my delight at Luke’s progress at AWW. Thanks to your support, in the last 17 weeks Luke and has turned his life around significantly. From where he has come from to where he is now, I am so proud of him.

The placement was really good and beneficial to me. The staff were all really supportive and nice and always made themselves available to me if I had any problems. The outdoor activities that were offered helped me to have a better outlook and showed me that I can do so much more in life, and it really helped me process and made me feel like a better person.

As METCO Officer for Cumbria Police I have regular contact with the team at AWW in relation to vulnerable children at risk of CSE and going missing. If a specific incident has occurred, the Home Manager and I speak on the phone to discuss the best way forward. She also attends CSE risk assessment meetings and we receive Philomena Protocol forms when a young person arrives in placement.

We use cookies on our website to give you the most relevant experience by remembering your preferences and repeat visits. By clicking “Accept All”, you consent to the use of ALL the cookies. However, you may visit "Cookie Settings" to provide a controlled consent.
Cookie SettingsAccept All
Manage consent

This website uses cookies to improve your experience while you navigate through the website. Out of these, the cookies that are categorized as necessary are stored on your browser as they are essential for the working of basic functionalities of the website. We also use third-party cookies that help us analyze and understand how you use this website. These cookies will be stored in your browser only with your consent. You also have the option to opt-out of these cookies. But opting out of some of these cookies may affect your browsing experience.
Necessary Always Enabled
Necessary cookies are absolutely essential for the website to function properly. These cookies ensure basic functionalities and security features of the website, anonymously.
Functional
Functional cookies help to perform certain functionalities like sharing the content of the website on social media platforms, collect feedbacks, and other third-party features.
Performance
Performance cookies are used to understand and analyze the key performance indexes of the website which helps in delivering a better user experience for the visitors.
Analytics
Analytical cookies are used to understand how visitors interact with the website. These cookies help provide information on metrics the number of visitors, bounce rate, traffic source, etc.
Advertisement
Advertisement cookies are used to provide visitors with relevant ads and marketing campaigns. These cookies track visitors across websites and collect information to provide customized ads.
Others
Other uncategorized cookies are those that are being analyzed and have not been classified into a category as yet.
SAVE & ACCEPT